“Our wish, our salvation, and our only hope is to end the historical crisis by becoming the alien, by ending alienation, by recognizing the alien as the Self, in fact – recognizing the alien as an Overmind that holds all the physical laws of the planet intact in the same way that one holds an idea intact in one’s thoughts. The givens that are thought to be writ in adamantine are actually merely the moods of the Goddess, whose reflection we happen to be. ” — Terence McKenna

E3’s in full swing just now, and one of the early surprises was that Bioware’s new sci-fi game, Anthem, isn’t going to have any romances — this is a pretty controversial take in some ways, considering Bioware are well-known for romances being a cornerstone of their Mass Effect and Dragon Age titles. In fact, it’s what a lot of people play their games for. Obviously, that’s not to say they’re beholden to add smooching into all of their games, but it still gave a few folk on Twitter — self included, despite my usual aversion to sci-fi space-operas — a certain kind of yearning for a new space game.

So I came up with an outline for Aria — a sci-fi game set in a transcendental spacetime station. I decided I wanted the game to express some of the things I think you could take to interesting places in games.

We start the game with our main character, a young man from 2118 awakening from hypersleep onto a cyclopean organic structure that appears to be floating in a vast sea of limitless light. Upon talking to a few residents of the station, we discover we’re on a spacetime station – an anchorpoint in the folds of spacetime that unites people from various times, places, and spacetimelines.

Over the course of the game, our main character befriends people (much in the same way as Tusks‘ socialising at camp scenes), which often results in the character getting new options in-game. The structure of the game is open-ended — my goal with the game isn’t to get the player to an end-state, but to present stuff that might make you go “holy shit yes, I’ve been trying to articulate this for ages”. 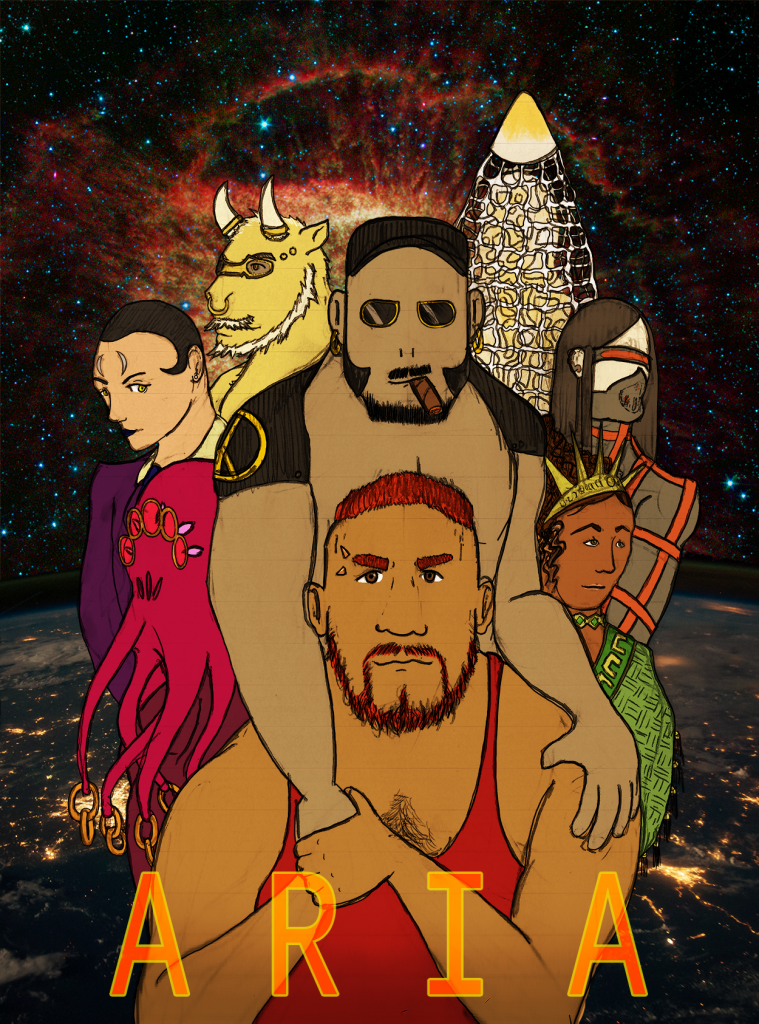 There are no guns in the game, no military, no wars or crises that require you to enter into any kind of martial conflict — instead, the game focuses on helping other people complete their own personal goals in a universe-spanning society where work is optional, humanity is upgradeable, and time is transcendable.

I wanted to make a wee teaser image for the game that embodied that kind of utopian energy (in fact, the image and the game concept kinda came into mind at the same time, and both developed as I worked on each). I wanted something that’s styled like videogame boxcover art and sci-fi pulp magazine covers, but which has the kinda utopian theme I was going for — what better way than having two of the characters in the shot interacting, and what better way to do that than have it be two men holding hands? I feel like you so rarely see that kind of thing happening in ensemble-cast games like Mass Effect — it’s all action shots, even though many people’s love of the game comes from stuff outside of the action.

Time (and interest) will tell if I ever make Aria, though – it would be a pretty big undertaking after all. For now, I’m happy to just put this wee image and blurb out there to say that I wanna find more folk who’re talking about spacetime exploration in much broader ways, across much stranger dimensions, than just “military conquerors from Space America and sexy blue alien women fly through space in a metal bullet.”

This article was originally posted on Patreon in June 2018.