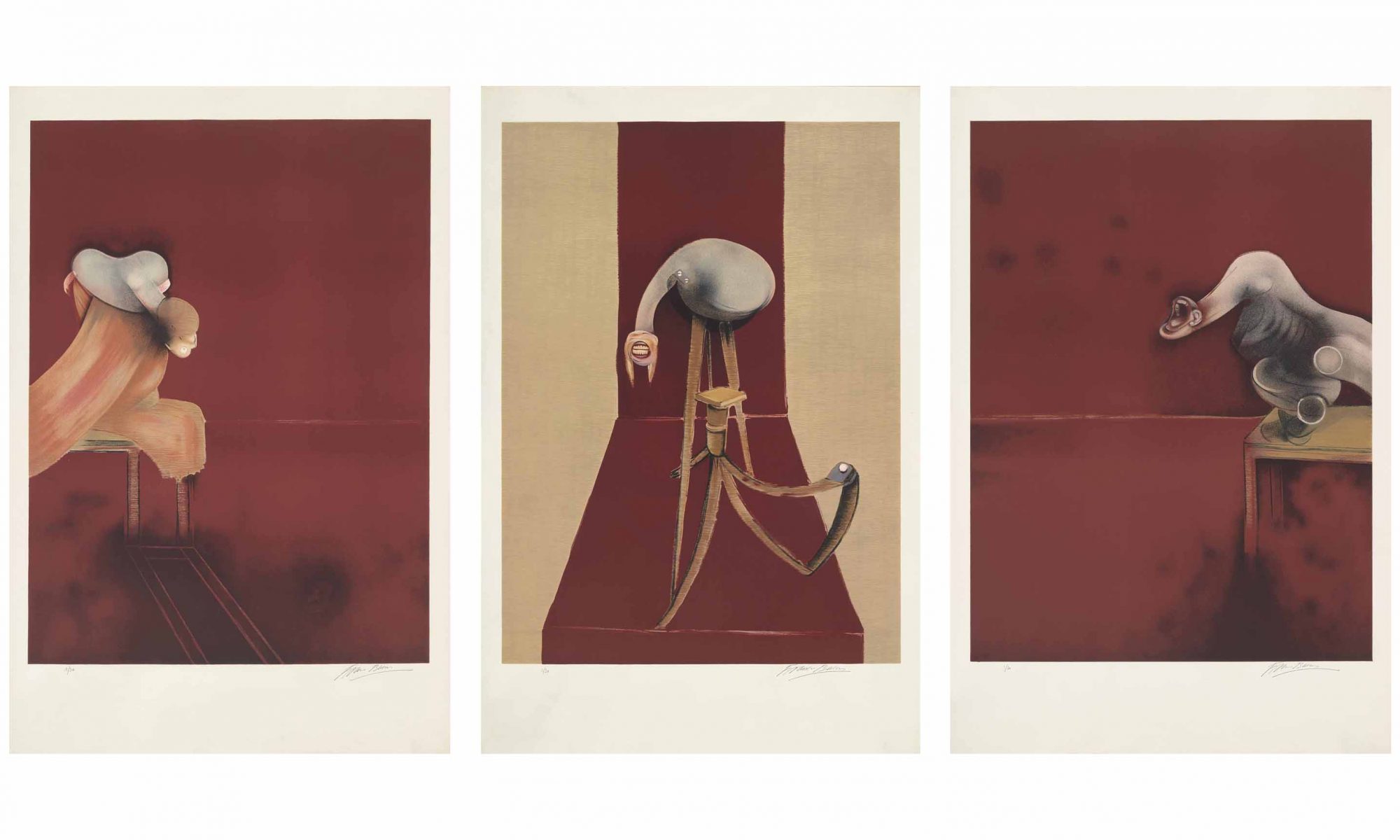 The Silent Hill series draws upon a vast range of artists and media for the inspiration behind its macabre setting, its disturbing and suggestive monsters, and its unsettling stories; the work of David Lynch (especially Lost Highway and Mulholland Drive), Adrian Lyne’s Jacob’s Ladder, Stephen King’s “The Mist”, and many more. Of particular importance is Francis Bacon (1909 – 1992), a gay Irish/English figurative painter whose artwork frequently explores themes of dread, violence, sexuality and the human condition – there are strong parallels between Francis Bacon’s work and the monsters, environments and themes of Silent Hill – violence, punishment, redemption, sexuality, death and humanity.

Of course, that’s not to say that the art team behind Silent Hill deliberately and systematically created the setting in deference to Bacon; only that both creators explored similar themes using similar approaches. Takayoshi Sato, the CGI director and character artist for Silent Hill and Silent Hill 2, has stated in an interview with IGN that his team looked at Bacon’s body of work for inspiration for the game, and Masahiro Ito, background and creature designer and later creative director, allegedly counts Francis Bacon as his favourite artist – and it definitely shows.

Even Bacon’s personal life had much in keeping with the themes of Silent Hill, in that many of his romantic relationships with men were marked with periods of cruelty and violence, not unlike the many dysfunctional relationships portrayed between characters in the Silent Hill series (particularly Silent Hill 2‘s James and Mary Sunderland). Bacon’s most well-known relationship was with George Dyer, who he claimed he met when Dyer broke into his studio one night – and Bacon responded by asking him to come to bed (as you do); their relationship was strained and eventually, Dyer committed suicide days before Bacon was to open his first major exhibition – which Bacon attended, completely setting aside his grief. Dyer was already a frequent subject in Bacon’s paintings, but after his suicide, Bacon worked on a number of paintings that addressed Dyer’s death. 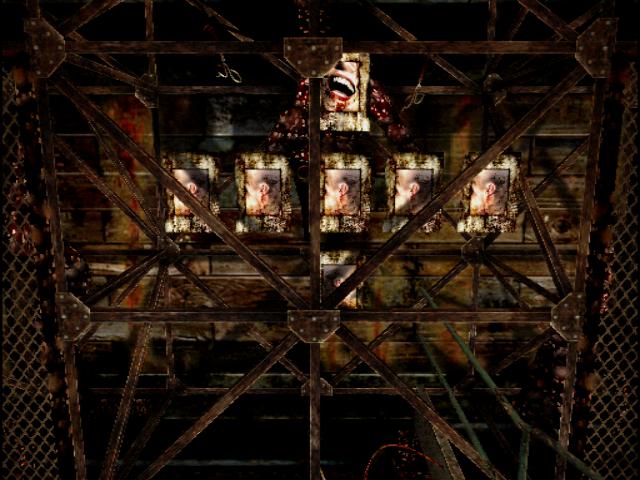 One of Bacon’s first “mature” works, “Three Studies for Figures at the Base of a Crucifixion (1944)”, as well as Second Version of “Triptych 1944” (1988) – the latter of which is at the top of this article – shares some commonalities with the repeated ear-and-mouth motifs that are found scattered throughout the Otherworld in Silent Hill 3.

Three Studies was painted as a triptych (arranged over three canvasses), and the ear-and-mouth images tend to appear together, but as separate parts, as in the image of five ears and a smile found in Silent Hill 3’s Hilltop Center behind a painting. The middlemost figure from Three Studies shows an entity grimacing, its face diminished to a mouth – the figure at the right’s face is comprised only a screaming mouth and an ear. Masahiro Ito has since stated that the mouth motifs represent “Alessa’s shrieking insanity”; the bleeding ear indicates that Alessa’s “conscious is mad”. In keeping with the themes of Silent Hill, Bacon reportedly modeled the Three Figures on the Eumenides, meaning “the Kindly Ones” – three Ancient Greek deities that came to be known as the Furies, “who pursue wrongdoers to a vengeful death”, a common trait of many of the “monsters” of Silent Hill (and, it could be argued, the town itself). 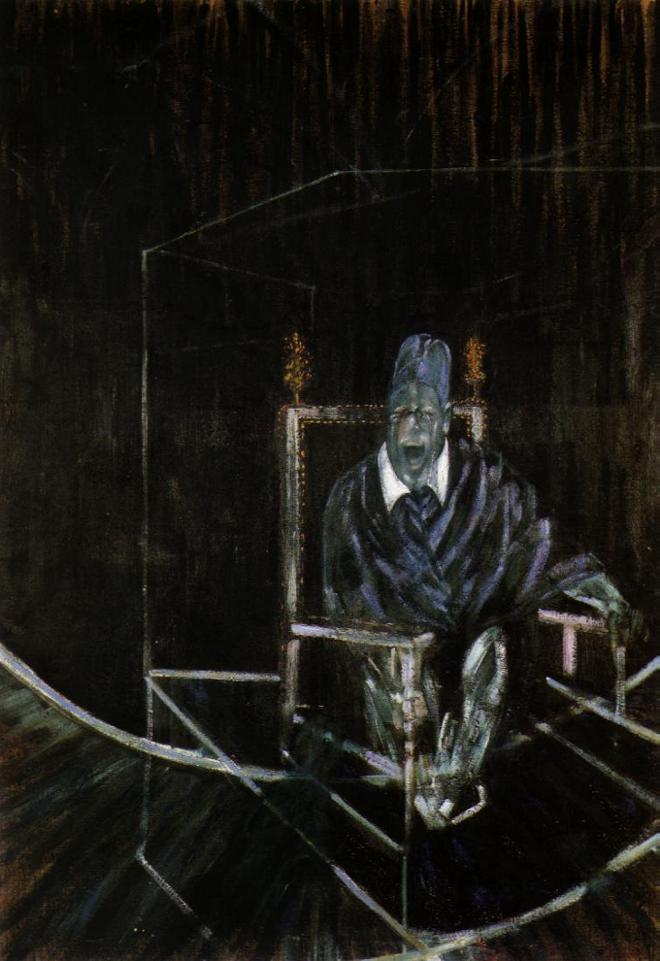 A repeated motif of Bacon’s were the use of lines and bars to demarcate space in his paintings – which had the added effect of making it seem like his subjects were seated inside frames, boxes, cages or prisons, such as Triptych Inspired by the Orestia of Aeschlyus, or his “screaming popes”, a number of paintings he modelled after Velasquez’s Portrait of Pope Innocent X. A number of Silent Hill’s monsters share this characteristic of being trapped in a cage, albeit in three-dimensions, such as Silent Hill 2‘s final boss and the Flesh Lips, Silent Hill 3‘s Glutton, and Silent Hill 0rigins‘ Sad Daddy.

In speaking about space and placement in Bacon’s work, it should be noted that it’s actually fairly difficult to talk about exactly where any of the entities he paints actually are. The locations and environments in his paintings tend to be solid blocks of colour or shapes rather than realistic representations of a building, or a room, or an open space – this is because so much of Bacon’s work focuses not on capturing the likeness of something, but trying to capture the sensation of something – instead of painting what one would physically see, he paints the sensation that that thing provides for him (and, to some extent, the sensation he wants that thing to elicit in other people). A useful metaphor for this method, interestingly enough, are videogames themselves; we can’t get the actual experience of what it’s like to be in war by playing a game (i.e., sleep deprivation, the psychological toll of killing another human being, being shot, and so on), so game designers look at what that experience feels like, and then create elements that make the player feel something similar to it – such as having the character breathe heavily and slow down when they’re running, knocking them back when they get shot, shaking the game camera when a mine explodes, and so on. In a similar way, Bacon takes an experience – such as the way he perceives his subjects – and then designs elements of a painting that help bring out that experience in the people looking at his paintings.

Bacon’s tendency to paint people, places and objects not as they really, physically and objectively are is pretty appropriate for Silent Hill – especially when you take into consideration Vincent’s unsettling ‘joke’ from Silent Hill 3: “They look like monsters to you?” Not everything in Silent Hill – the town and the game – is exactly what it purports to be.

As an example of this “non-realistic” way of representing people, many of Bacon’s portraits are painted such that the faces of his models are heavily distorted, warped and blurred, as though in motion; this is reflected in the “twitching head” motif of many of Silent Hill‘s monsters, including Silent Hill 3‘s Valtiel and Glutton. Works where this facial disfiguration is particular apparent include Study for Self-portrait – Triptych (1985-86), where Francis’ own face is marred and crooked, almost bloodied, and Three Studies for Portraits: Isabel Rawsthorne, Lucian Freud and J.H. (1966) (above), where the eponymous figures’ features all blend and coalesce into one another.

Bacon also tends to distort the bodies of his painted subjects in various ways – in Triptych August 1972, his model (probably George Dyer), seems to be partially liquefied, his skin spilling out as an orchid stain across the floor. More often, angular, ambiguous geometry is used as Bacon plays with perspective, distance, and the figure-and-ground distinction – again, the locations in his paintings are not true, realistic representations of a physical space – as in Triptych – Studies from the Human Body (1970) (above), in a way not dissimilar to levels in Silent Hill, particularly the recurring “Nowhere” level, where the dimensions and geometry of the surroundings have become warped and difficult to navigate. 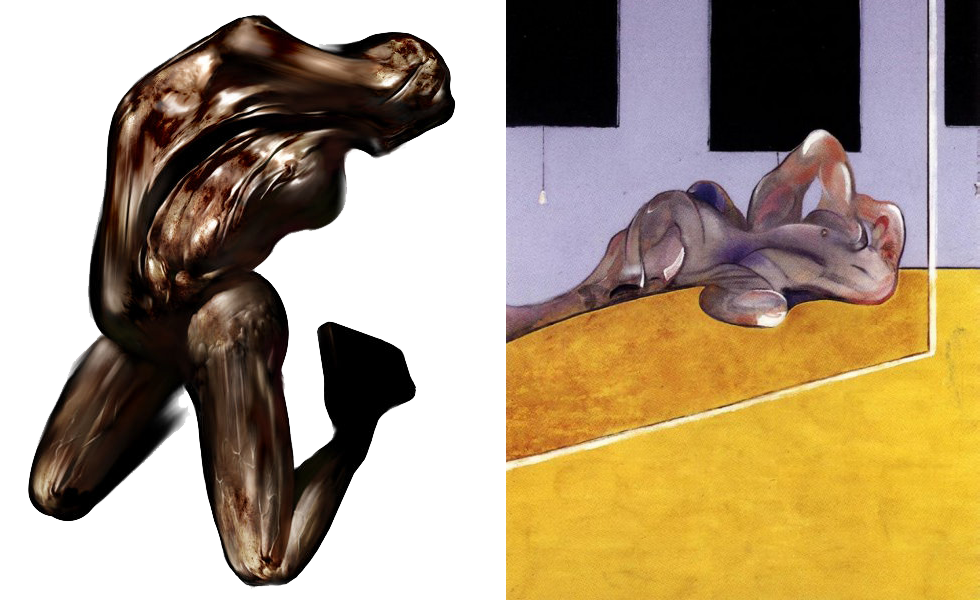 Some of the creatures of Silent Hill bear uncanny similarities to the subjects and themes of Bacon’s paintings. For example, the poses of the subjects in Two Figures (1953) calls to mind Two-Back from Silent Hill 0rigins, which takes the form of two disorted human figures fused together in what appears to be a sexual act. These elements recur in a slightly different way in the monster Gum Head, from Silent Hill: The Room, with two heads melted together. The “Lying Figure” of Silent Hill 2 may even have its origin in some of Bacon’s works that include the phrase “lying figure”, a convention used to denote the type of pose that is held by the subject of the work. The entity in Lying Figure in a Mirror (1971) (above), with its mottled, warped skin, easy calls the monster to mind.

In the later games of the Silent Hill series – from Homecoming onwards – Bacon’s influence fizzles out, most likely as a result of the series switching hands to other development studios, and thus, other artists. It could be argued that this takes something away from what makes Silent Hill so unlike other horror games – Bacon’s influence having been there from Silent Hill‘s inception means that his style of art has become an integral part of the series, and moving away from it (visible in the difference between the early game’s allegorical monsters and the more rigid, literal monsters of later Silent Hill games) may have something to do with the perceived negative reaction to the later Silent Hill games among fans of the series.

This feature was originally published at GayGamer.Net in May 2013.