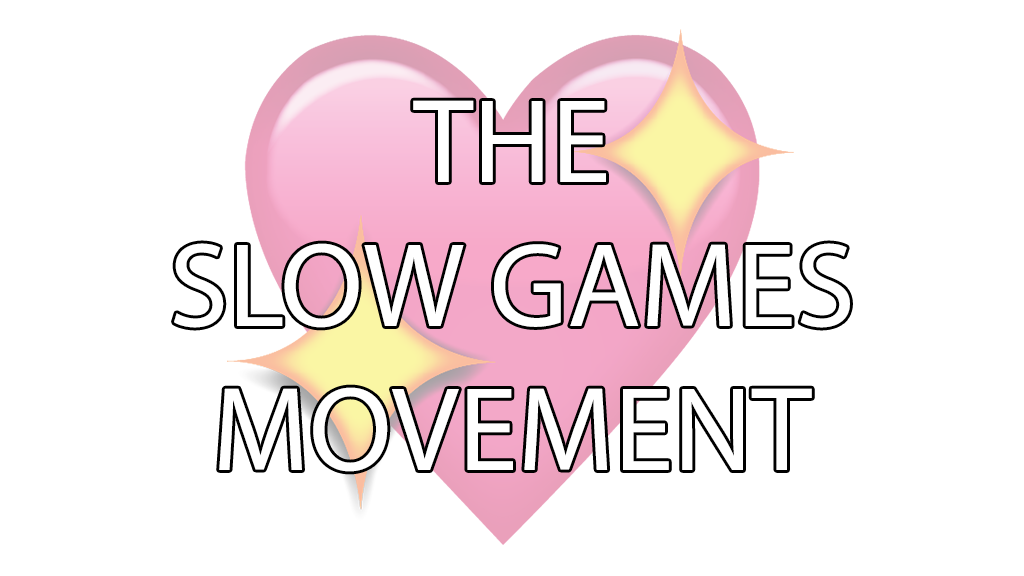 A manifesto calling for a slow games movement.

The medium of videogames, like virtually all aspects of modern society, is accelerating rapidly. It feels like it’s tougher than ever to stay up-to-date, to have the latest hardware, to be using the most cutting-edge technology, to have played the newest releases, to have reviewed games as early as possible, to be conversant about the hottest takes, to attend the expensive industry events, to have known personally the people who are trending before they’re trending and before they’ve stopped trending.

The vehicle of videogames is careening out of control, and we’re constantly trying to hand over the reins to people we believe are more in-control.

The slow games movement asks if it’s not a better idea to try to just slow the fuck down.

The slow games movement is inspired by and is parallel to other “slow movements”, such as slow food, slow science, and slow living. As a multi-billion-dollar international industry primarily comprising technology and media, it is highly comparable with slow fashion in particular.

There have been calls for a form of slow games movement for some time:

There have also been calls for similar attitudes, notably the soft chambers project (now only available via archive.org – what other manifestoes like this have vanished because we went on without them?):

The approach to slow games suggested here does not exclusively mean “playing fewer games, more slowly”. The slowing is not merely of playing the game, but of all aspects of game culture and industry, from development to criticism to playing to engagement to curation.

The velocity with which people involved and invested in games go through them (in any aspect of creation or consumption) is destructive, and very quickly wears people down. Games are made rapidly, with (attempted) ruthless efficiency that is blunted only by “inconvenient” human needs, which are soon mangled by the machinery of the games industry and thrown out. Once a game is rapidly developed, it is rapidly reviewed. It is almost expected that game reviews be written before the game is released, putting pressure on game reviewers, critics and editors to guarantee word counts, deadlines, SEO optimisation and efficient marketing as soon as possible. Players must keep up to date with news and advertising for upcoming games, buy new game releases and consoles, and must accept the lie that the cultural relevancy of these games stops after about four years (“because better stuff has come out, you know”), until a decade or two later, when they will be re-released (requiring you to re-purchase them) on a new platform (requiring you to continually buy the next one).

Some of these wheels can be removed, some can be repaired, and some can be replaced. But first they must be slowed. This manifesto calls for more people to adopt principles of the slow games movement to help us create healthier, more sustainable, and more enjoyable games cultures.

Our technologies develop so quickly that in the space of a few years, most of the tools vital to game creation are outdated or unsupported. To be able to develop something during this period of novelty, one must be perfectly situated or able to jump onto the ever-spinning WHEELS OF OBSOLESCENCE — something that very few can afford to do, and those that can, tend to occupy a very similar demographic, resulting in a self-repeating cycle that institutes sameness in place of diversity.

By virtue of its strong connection with technology, videogames as a medium travels — and accelerates — at the same rate as technological progress. We’re able to consume faster, review faster, play faster, critique faster, design faster. Even one of our standard processes of creation — the Agile process — is designed to help us work more quickly and efficiently.

The slow games movement asks if it’s really better to sprint through a burning building rather than putting out the fires.

The size and scope of games companies has massively expanded since the early days of the industry. Game startups are just as common. And the appeal to work in a job you love is strong, especially in a world that seems so good at making us feel bad.

Strategies involving or dependent on the allure of getting the “dream job” of working in games must be scrutinised. Companies should not be advertising junior roles that require several shipped AAA titles and 4-5 years of industry experience. Workplace cultures must be cultivated rather than enforced, and must actively seek to move away from tolerating abusive or bigoted people’s behaviours that are justified with the excuse of “that’s just what the games industry is like”. More holistic – and most likely “airy-fairy”-looking management strategies – must be considered to allow for more approaches to games as work.

The dominant culture of game-players stresses the importance of novelty: games are completed and then dispensed with. The cultural value of a game seems to drop in the years following its release, to the point that after about four years, it’s considered outdated to talk about it (until a re-release comes round, and then some cursory articles will appear). As such, it’s considered important to stay up-to-date — if you haven’t played the newest games, you can’t contribute.

Not only this, but AAA games and big-budget-but-technically-independent games have much of an advantage above all others. The WHEELS OF WHAT THE DEMOGRAPHIC WANT mutually support one another — games sites only discuss the newest games ’cause that’s what players want, and players only see the newest big-budget games on games sites, so that’s what they play.

The Sisyphean task of keeping up with only the most recent AAA games takes us away from exploring other avenues of games — such as retro gaming, games curation, games as art, and serious games.

There can be no such thing as “slow consumption”. “Consumption” sets the act of consuming as the end-game of the process of engaging with media — we are said to “binge” on media, then excrete it. Additionally, “slow consumption” puts one in mind of tuberculosis. Instead, the focus is on slow engagement – analysing and talking about games over a lifetime, much as we would films, books, and other media whose older works of art are not considered any lesser for being earlier.

Slowing the medium of games does not mean keeping its games “alive” indefinitely. Curating and archiving games is necessary so that we have a memory of the history of games, as other art media do. In some cases, even attempting to have a record of the games that have come before is difficult, as intellectual properly laws may mean we cannot archive the games themselves. There are now games we cannot play anymore as the hardware is expensive or difficult to find or recreate, or the software is no longer usable or is missing.

“Official forums that go down if the game is discontinued” results in black holes of valuable information about games and how they’re engaged with that we may never get back unless curation and archiving is sought too. The work in game manuals, magazines, blog posts, communities may be lost without archival.

Slow curation asks for games not to be cast off, leaving a gap that is only ever described by the surviving ephemera around it. More support for archiving games is required to save our history from erasure by neglect.

There has been a lot of discussion about the subject of “serious games”, the idea that games can help solve real-world problems, and/or can help educate people in ways that have real-world effects. Often, it’s supposed that games — by virtue of their interactivity — are unique in this regard, and that they alone can “change the world”.

The myth of the noble solitary hero that changes the world is as ubiquitous when it comes to describing the medium of games itself as it is in the narratives of its developers as it is in the games themselves.

The real way games can change the world is not by streamlining developmental pipelines, or by gamifying human emotional responses – it’s by slowly establishing sufficient buffers between the issues that prevent people from being able to make, play or talk about games. This means solving actual, real-world structural inequality alongside developing technologies for the issues that games can help heal or solve (uniquely or no).

It could be said of any of the ideas of this manifesto that they are difficult (if not impossible) to manifest without similar and comparable action across all other parts of life, which may even require the full energy of revolution to make happen.

SOME SLOW STRATEGIES FOR GAMES IN WORK, PLAY AND ART

This manifesto, alongside Monstrous Love and Heroic Failure, was created as part of the Manifesto Jam, February 2018.