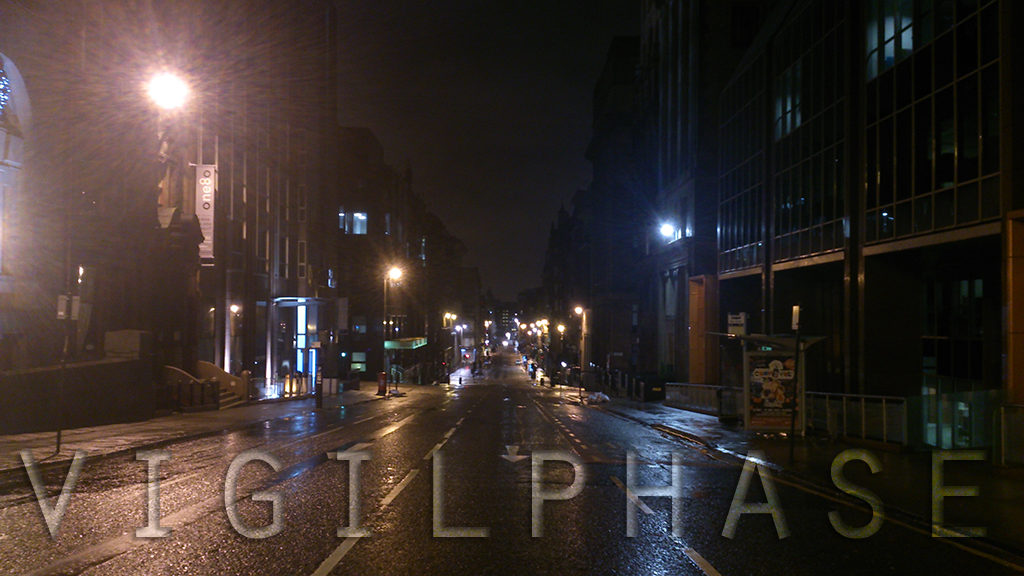 Vigilphase is an aesthetic in the manner of steampunk, solarpunk, vaporwave or witch house. Vigilphase can also be known as known as ghostpunk, vigilpunk, or hauntpunk, and shares a great deal in common with hauntology.

The aesthetics, technologies and ideas of the past and the future push up against the present, causing cracks, stopgaps and interstices – and this is where vigilphase takes place. Vigilphase is any practice that is ahead of its time while being old-fashioned, any object that is made of state-of-the-art systems propped up by obsolete services, any place engineered for a vision of the future that now belongs in the past, any artistic vision that is caught between nostalgia and premonition. In vigilphase, the past is rarely well-known despite its familiarity; the future is rarely surprising despite its novelty.

Vigilphase is not merely “the present” – it is a present that is a step sideways out of phase with reality, resulting in messiness, uncertainty, organicness, tension, anxiety, weirdness, nostalgia, forgetfulness, longing, or uncanniness. However, vigilphase can be optimistic or pessimistic, fantastic or realistic, cynical or hopeful.

Vigilphase is what occurs in the cracks of a unified scientific vision such as the evergreen utopia of solarpunk, the augmented reality of cyberpunk, the well-oiled machine of steampunk. Vigilphase can be reached in any space where life continues on, often uncelebrated or unrecognised for its will to keep going. Vigilphase is the recognition and humble celebration of continued survival, without necessarily pedestalising or demonising; the acknowledgment that many people can have smartphones while still living below the poverty line; that modern life is so paradoxical that the same things that nourish us can also destroy us – or, more accurately, nobody can say for sure if it’s one way or the other.

Vigilphase recognises that we do not live independently of others’ spaces, and others’ times. What is morning to one person is night to a person on the other side of the globe. Waking hours to he working day-shift are sleeping hours to she working night-shift are both to ze working split-shift are neither to they working graveyard-shift. We live in rented spaces, on borrowed time, alongside infinite obsolescence and innovation.

As cyberpunk has its hackers and shadowrunners, steampunk its engineers and explorers, vigilphase has its investigators, its vigilkeepers, its watchers, its vigilants, among others.

Vigilphase is invoked in any work, art and thinking that operates between, beside and outside binaries of technology, sleep, death, sunlight, modernity, the future, and narrative. To be involved in creating things in the vigilphase current or aesthetic involves recognising the cohabitance of innovation and obsolescence; complicating or exaggerating ideas of healthy sleep and alert wakefulness; exploring the foggy areas between and outside life and death; seeing something of the past in the future (and vice versa); respecting the need for odd hours; understanding the messy complexity in the gaps of new waves of technology; looking back at previously-imagined futures, and turning the mirror to examine our assumptions about the past; acknowledging and describing the moments in one’s life when we slip between the cracks; seeking out and developing variation that is not always clear-cut and isolable from the system that created it.

Vigilphase is so named for the “vigil” – the observation of something taking place – and “phase” – the recognition that what is occurring alternates in flux.

Traditionally, a vigil is a period where a person will choose to stay awake when others are sleeping. As a result, these periods are often temporary and transitory, and borrow from both the land of wakefulness, and the land of sleep. Events that are vigil-like from everyday life include:

Vigilphase is transitory, ephemeral: glimpsed at opportune moments, or sought out in times and spaces where time and space have become strange.

Anything that draws attention to spatial subjectivity and temporality (especially the passing of time and the fleeting nature of events) can be a potent symbol for vigilphase. This includes:

The record is a common aspect of the vigil. The record is emblematic in some way of the strange space-time of vigilphase; an artefact written in the past, about the present, for the future, perhaps, or a future vision, recorded in the present, to explain the past. The record may even be something outside of our conventional understanding of time and space.

The record is some way of recording or capturing a period of vigilphase as it happens, a way of bringing back information gained from vigilphase, or a way of locating or describing vigilphase while outside it. This manifesto itself is a vigilphase record.

Many records are annotated in some way, and are preserved, created, analysed or observed by those keeping the vigil. Examples of records include:

Here are examples of media that can be considered part of or adjacent to vigilphase.